THE CASE – “What is a football club?”

So a club exists through the perception of its fans, not a current legal piece of paper or where it currently plays. The older teams existed prior to any incorporation or subsequent change in legal ownership/status.

THE CASE – Other Clubs

Stoke City has 1863 on its badge which is the date taken from a 1905 football book. This is disputed, as the first recorded newspaper reports of its games were in 1868 and these stated that the club had been formed that season. When Notts County (formed 1862) were relegated from the Football League, the FA reported that Stoke were now the oldest League club. Later the Football League stated that Nottingham Forest (founded 1867) were the oldest. So which body is the ultimate ‘arbiter’? There isn’t one and neither is there a ‘holy grail’ that you can go to, to check. Ultimately it is the club and the fans themselves who will decide. Stoke went bust in 1908 but re-formed shortly afterwards. Contemporary reports called this re-founded club “new”. Personally, I am with Stoke and its fans and say 1863 is a reasonable and fair date. Stoke became professional in 1885, some 22 years after its ‘claimed’ original founding.

A proud club that has been dominant in Scottish Football since the club was formed by 4 teenagers in 1872. It incorporated in 1899 and has won the Scottish League title 55 times. However, in 2012 the company went bust and its assets were subsequently bought by another company. Rangers FC started the following season 3 leagues lower and with only some players from the previous season. They continued their home games at Ibrox. Was it the same club or not? Again, there were differing opinions from different ‘authorities’ at different times. The Scottish Premier League, the Scottish Football League, UEFA and FIFA all had to grapple with the question – particularly UEFA who had to contend with one of their own rules which only allowed a club to compete in its competitions if it had 3 years of audited accounts. But again, I’m with the fans who continued to turn up at Ibrox with the same coloured scarfs. I’m sure that a 75 year old Rangers fan who says “I remember being here when we played xxxx 70 years ago and I was on my Dad’s shoulders”, not unreasonably sees it as the same Club. I’m with him.

Wimbledon FC was founded in 1889. The club rose through the amateur and semi-professional ranks and got into the Football League in 1977. They had a dream rise to the top flight and, against all the odds, beat Liverpool to hold the FA Cup in 1988. Lack of a permanent ground and money troubles led to their owner moving the Club (some fans would say ‘Ripping the club’) away in 2003 from its home in SW London and re-locating it 56 miles further north to Milton Keynes. In disgust, Wimbledon fans created AFC Wimbledon, which the vast majority of Wimbledon fans transferred their support to. AFC Wimbledon started 10 leagues below but in a fairy-tale rise, they won many successive promotions and re-entered the Football League in 2012. Meanwhile, the corporate entity that had been Wimbledon FC was bought by Inter MK Group in 2004 and concurrently changed its name to MK Dons. Initially MK Dons claimed the history of Wimbledon FC and held the cup replica that is given to all winners of the FA Cup. Fan ‘power’ and the all-important opinion of football fans carried the day, however, and following an agreement with the Football Supporters Federation, MK Dons formally relinquished the claim of owning the history of Wimbledon FC. The replica trophy was returned to the Borough of Merton and Vinnie Jones, one of the heroes of the 1988 Wimbledon FC team even gave his FA Cup winners medal to AFC Wimbledon, stating that AFC Wimbledon was the continuation of the Club he felt he had played for.

THE CASE – The Crystal Palace story

So it is right to say that there is absolutely no connection whatsoever between that first incarnation in 1861 and the professional club of 1905? The Crystal Palace Company is the reason that both incarnations happened in SE London, and for the same reason – the company had an interest all along in football being part of its business.

Let’s take a fictitious example of ‘no connection’. In one part of the country, a club is formed by locals to enjoy football and is eventually bankrolled by a local businessman for some years. Eventually it goes bust and ceases. Some years later, a club that co-incidentally has the same name, is created 200 miles away by a different corporation that has a different reason for creating and bankrolling this new club. Under this circumstance, it would be fair to say “The first club had no connection with the second club”. This didn’t happen in the case of Crystal Palace.

New discoveries change our view of history and Peter Manning’s production of so many newly discovered facts released only recently by the British Library, surely sheds a different light on the Club’s history? When I was a kid in the 1960’s I remember distinctly being told that the 1861 Crystal Palace FC DEFINITELY HAD NOTHING TO DO WITH the 1905 Crystal Palace FC, as it was just a bunch of groundsmen at the Crystal Palace itself who formed the team. I have to say, I feel slightly cheated by this story that was clearly put around for a reason. I have a couple of theories of what this reason may be, but that’s for another time.

Officialdom, corporations and governing bodies, usually cling to a long-held position and are reluctant to change it (for fear of looking silly), but that isn’t always the case. To ignore new evidence and stick dogmatically to a view that looks increasingly outdated renders you in danger of looking even sillier and some of the more forward-looking organisations take this on board.

So contrary to what some (self-professed) experts might tell you, there is no ‘exact/true answer’ in the determination of when a club was formed nor is there an indisputable documented approved ‘list’ showing the formation year of every club. It can only ever be a matter of opinion. We are looking at the murky world of human interaction and practice, compounded with ‘bits’ of evidence gleaned from history. To me, it comes back to what the fans and the club ‘feel’ based on all the evidence presented. When I read about the matches and players of the original 1861 Crystal Palace FC, and having looked closely at all the new evidence, I feel I am looking at my own club. So now, to me, the ‘1905’ in the badge looks wrong and is just an arbitrary date some way in the middle of our club’s timeline.

But hey, I’m just a 60 year old dinosaur with busted knees and less Palace years in front of him to win the FA Cup than behind him, so what do I know? So perhaps the last word on this should go to the new generation of Palace fans, like my twin 8 year old grandsons, Harvey and Jasper who have their season tickets with me and my son in the Holmesdale Upper. I used to think that it was only going to be a matter of time before they quietly announced that they’d changed their allegiance to Man U, Liverpool or Chelsea, but I’m proud to say they’ve never wavered from supporting Palace. They have a giant Palace badge on their bedroom wall and sometime after they’d seen the Chris Grierson video, my daughter sent me a slightly indignant text: “Dad! – why has Jasper written all over his new Palace poster!?”: 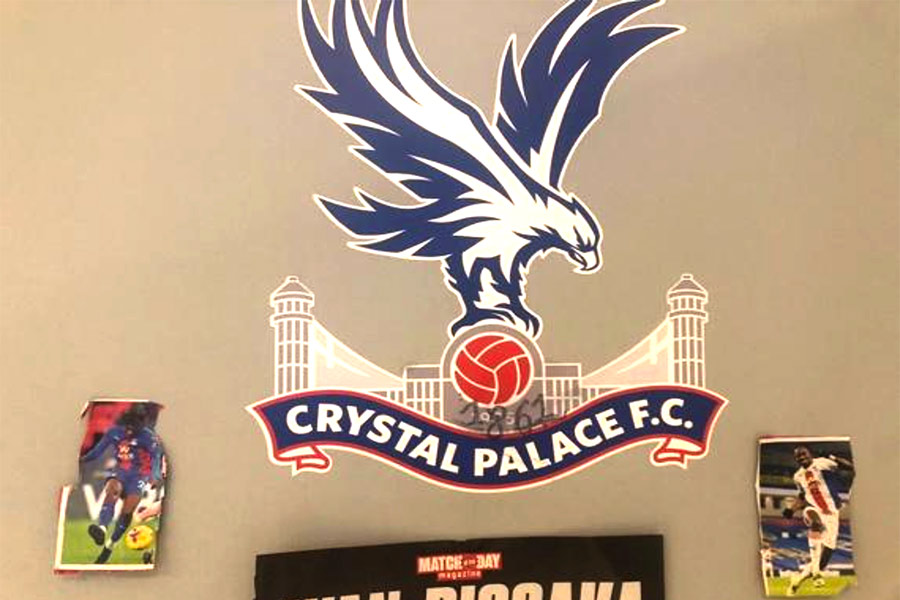 And then there’s Harvey. When I asked him what name and number he wanted on his new kit this year, I fully expected he’d ask for the usual home kit and either “HARVEY 8” or “MCARTHUR 18” on the back, but he insisted on this: 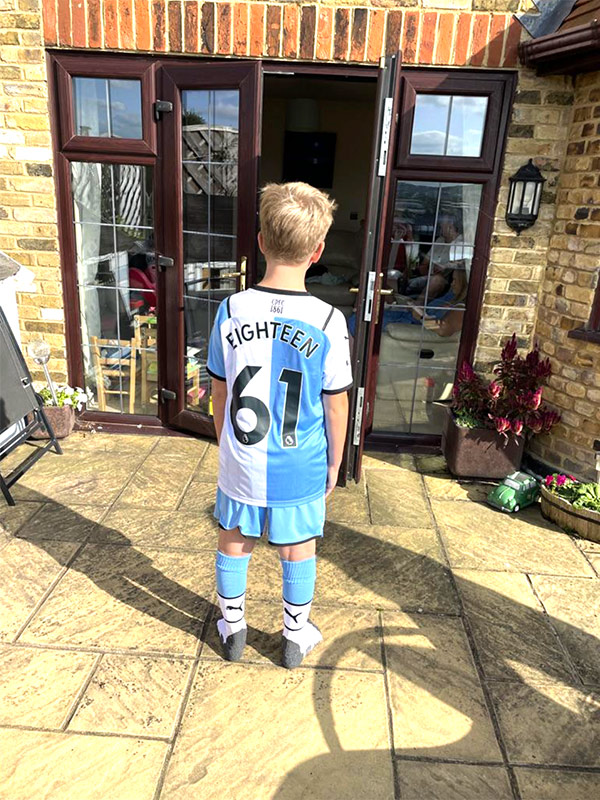 THE CASE – Correcting the Error or a Permanent Mistake?

I do hope that the Club will consider a permanent change to the badge which would fully endorse that the Clubs story started in 1861 and not 1905, thus correcting the error.

If we just carry on into the future with 1905, to me it would feel that we will forever be locked into an incorrect time warp.

Of course, the final decision on whether we change our badge and formation date has to be with Steve Parish and the Directors of the Club. They are the current custodians of the Crystal Palace FC journey after all and we must respect whatever they decide.

It might be that many Palace fans either don’t really care and are just interested in watching the next game or even that they think it should stay as 1905. As a club is its fans, it would be useful to know, not least for the club itself, how many agree with me and would like to see the club badge changed. This is why I’ve created this webpage – for fans to express themselves if they so wish. So if you do think Crystal Palace FC should change its badge to 1861, please press the button below:

Back to top
Close

Thank you for your vote